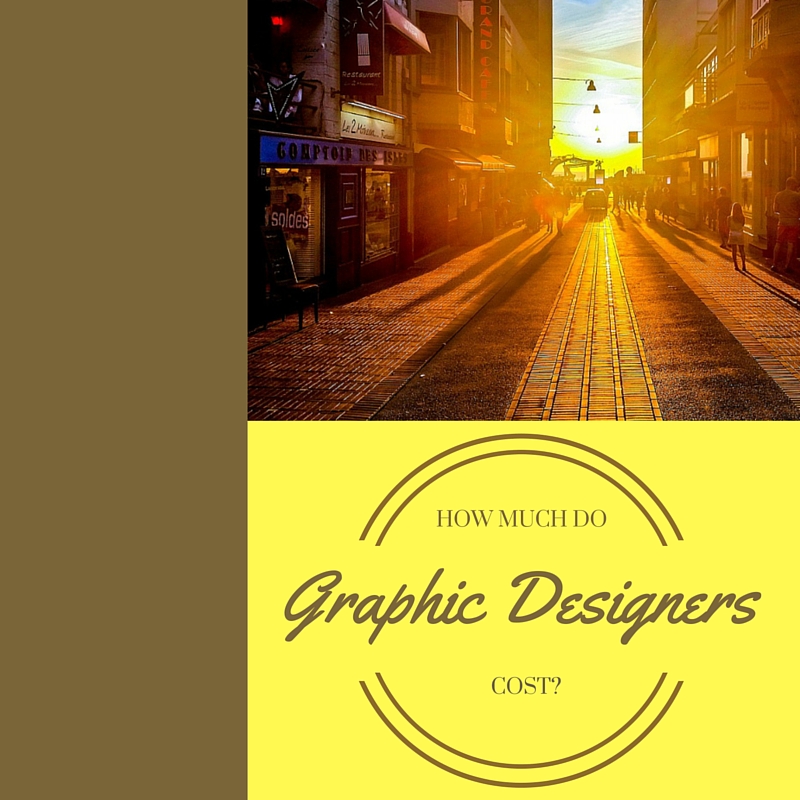 You might think that hiring a graphic designer for your business might be expensive. That may or may not be true depending on your budget and the project.

So, How Much Do Graphic Designers Cost?

For the most part the cost of hiring a Graphic Designer is a lot less expensive than keeping a designer on staff, working 20-40 hours a week. A company may pay a designer anywhere from $25,000 – $45,000 a year…or more.

However, there are a few ways to pay for a Graphic Designer if you don’t have one in-house – by the hour, by the project, or on retainer.

A Graphic Designer may charge a typical fee anywhere from $15 an hour to $60 an hour. This fee varies, though, based on the designer. You may find one that works for an agency, or one that freelances. I find that the freelancers tend to charge less than those that work for an agency simply because they have less overhead and can set their own fee schedule. However, a freelancing Graphic Designer can still charge anywhere from $15/hour to $30/hour (or more).

If you decide to hire a Graphic Designer by the hour, my suggestion is to interview several different designers. Ask for a portfolio from each and get an estimate on the length of time it takes to complete specific projects (i.e. a digital ad, a flyer, a newsletter, etc.). Once you have a hourly rate and an estimate on the length of time per project, you can then figure out an estimate for each type of project. Of course, keep in mind that each design may have a varying degree of complexity and the more complex the owner’s need, the higher price may go for the design. 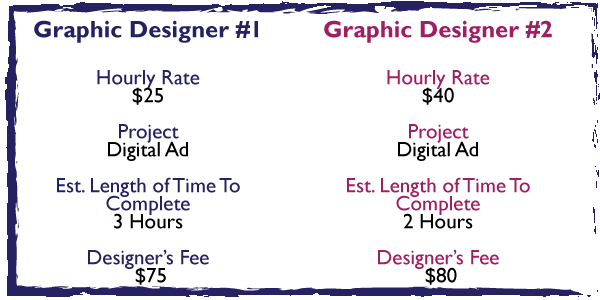 As you can see, rates may vary, but so do length of times to complete a project, etc. By creating a comparison and interviewing several designers, your marketing and design options increase…without breaking the budget.

And, some designers charge by the project, especially if it’s a big project or there are multiple revisions or it saves the company money – perhaps by grouping several smaller items into one large project – almost like a group discount.

For example, I have a client where I have normal duties that I charge by the hour, but if a special project comes up, we’ll discuss it and I’ll give her a set price for that whole project (separate from the regular work that I do for her). She knows going into this project that it will be taken care of in a timely manner but also what to expect on the monthly bill. There are rarely any surprises.

Project-based fees can be anything that would be a one-time project, like a logo, banner ad, print ad, e-book design, etc.  If it’s outside the normal scope of what a Graphic Designer would do for your company on a regular basis, that could be set up as a project-based fee.

Also, make sure you and the Designer have an agreement on how many changes will be made, expected turn-around time, etc. I created a logo for a client that had 24 (yes, 24) revisions. That was a bit much and I should have charged more, but I didn’t. I quoted one price and told her we would work it through for that same price, but I should have stated that that price would increase if there were more than 5 revisions. The project was completed, but I ended up sending the files to the client so that they could make the final tweaks themselves since they wanted very minor changes each time. I’ve never had anyone with that many revisions before.

I have another client that pays a set fee schedule they send to their group of Graphic Designers for social media memes, banners, full page ads, quarter page ads, etc. They give this fee schedule to the Graphic Designers and when a design is needed, the Designer already knows what is going to be paid, regardless of the amount of time it takes to complete. That’s another option for companies.

You may decide to keep a designer on retainer (on stand-by) and pay a monthly fee to that designer. This allows you, the company, to control your costs and also gives the Designer some income stability. You may decide that by keeping the Designer on stand-by, any work you need done takes priority over other clients. It could also mean that the Designer agrees to a certain number of hours to work on your company’s designs or projects – whether it’s creating a monthly newsletter, updating website graphics, creating booklets, etc. You can also request that the Designer submit a work log of the projects worked, time spent on projects, etc. so that you can verify your costs at the end of the month. This may be an option for larger companies…those that can’t afford an in-house, full time Graphic Designer, but need someone to be there in case of emergencies or for those design changes/updates that are consistent each month.

I know of another company that pays a certain amount every month for 8 hours of work per week. But, they know that over the course of a year the Designer will create approximately 60 designs, two 16-page brochures, and six 50-page brochures. They know exactly what they need and have adjusted their pay according to this.

Whichever option your company decides to do, just know that it’s money well spent. A great Graphic Designer can really enhance your brand, your products, your online presence, as well as make your life easier (since you won’t have the time to do his/her job). After all, when you hire a Graphic Designer, you are really buying back your own time and peace of mind.

It’s more economical for a company (especially a small business) to hire a Graphic Designer on a contract basis – by the hour, by the project, or even on retainer.

When you find a designer you like (based on the designer’s portfolio, hourly/project rate) give him (or her) a test run. Try her on a project and see if her pricing remains the same as quoted, how quick her turn around is, as well as the quality of the final design. If she meets all your standards and her pricing remains the same (i.e. no hidden surprises in your final bill), then you’ve found a keeper.

If what you discover is not what you wanted and the designer is not willing to make changes quickly (or without charging an extra fee), then you probably need to keep searching.

Check references as well. That’s another way to see if a designer has a satisfied client base. And, read the post on my post on the 10 Things to Look for in a Graphic Designer. That gives a list of suggestions for finding the right designer for you.

Leave a comment and let me know how your experience has been working with Graphic Designers. 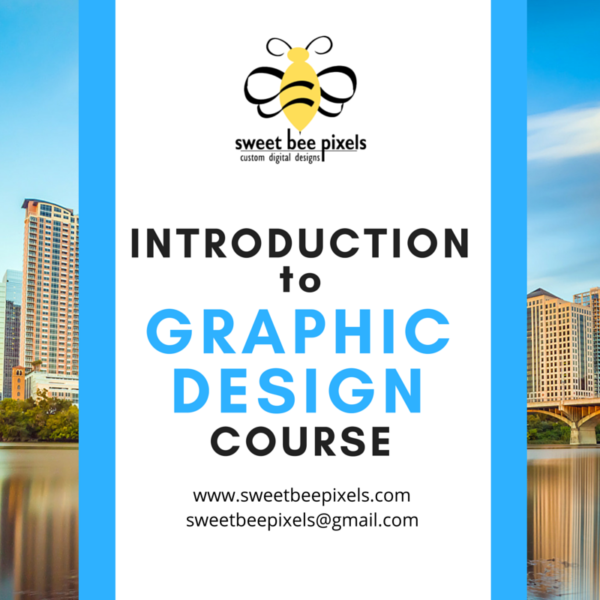